With the participation of members from the Supreme Political Council and officials from the Salvation Government, Yemen Center for Human Rights releases a legal study entitled ‘ the Security Council and the Aggression on Yemen: Airstrikes and Resolutions’

The issuance of the study took place during the launch ceremony which was held by Yemen Center for Human Rights in Sana’a on Thursday, February 10, 2022, corresponding to Rajab 9, 1443 AH. The ceremony, introduced by Dr. Souad Elwessi, was attended by Mr. Muhammad Al-Munyai, member of the Supreme Political Council; Judge Nabil Al-Azani, Minister of Justice; Judge Muhammad Al-Dailami, Public prosecutor; Ambassador Dr. Ahmed Al-Emad, Head of the National Team for Foreign Outreach; Mr. Nasr Al-Din Amer, Chairman of the Board of Directors of the Yemeni News Agency Saba, Editor-in-Chief of Saba; Mr. Hammoud Al-Naqeeb, Head of the Social Affairs Committee in Amanat Al-Asimah; and Mr. Ammar Al-Adra’i, Executive Director of the Oil Company; and a remarkable presence of law professors, judges, and others from human rights and legal affairs departments from the Presidency of the Republic, Public Prosecution, Ministry of Defence, Ministry of Interior, and Ministry of Justice. In addition, the ceremony enjoyed the attendance of a number of law specialists, human rights activists, media workers, and civil society organizations.

The launch ceremony begun with a recitation of verses from the Holy Quran, followed by the national anthem of the Republic of Yemen and a speech by Head of Yemen Center for Human Rights Mr. Esmail M. Al-Mutawakel, in which he welcomed the attendees and highlighted the importance of the study and its aims and  preparation stages. Mr. Esmail Al-Mutawakel also brought to attention the reports and resolutions of the Security Council and the Expert Panel regarding Yemen that were refuted and studied from a legal point of view, and pointed out the violations committed by the Security Council and its duplicity in dealing with the Yemeni situation from 1947 to 2021.

‘The UN has missed the opportunity to prove its commitment to the values and purposes of the UN Charter: Peace is now beyond reach due to the crime of aggression; the wheel of development is not moving any more due to the blockade imposed on Yemen with the support of the UN and under its supervision; and the human rights of the Yemeni people have been taken away as children, women, and men are being killed in Yemen due to the coalition’s airstrikes and bombardments that killed and wounded 42863 civilians since the beginning of the aggression until the end of 2021. All of that was carried out through the Security Council’s cover and support and due to the General Assembly’s connivance, which deprived the Yemeni people from their right to self-determination and denied the revolutionaries the opportunity to have their voice heard and present their just cause in the halls of the UN and the Security Council.’

He also made clear that the Security Council had committed violations, if not crimes, due to its support for the aggression of the Saudi-led coalition against Yemen under the pretext of responding to a request from a resigned president who did not represent any national party or component and is no longer in the country as he left it after declaring a coup against Security Council resolutions and the Peace and National Partnership Agreement, which the Council adopted as a reference.

In addition, Mr. Esmail Al-Mutawakel called upon all free people to take their historical responsibility seriously, revive the UN principles, and take a declared humanitarian stance by demanding the Emirati- and Saudi-led coalition to stop its military operations in Yemen. He also called for urging the General Assembly to take historical action by calling for reconsidering the powers of the Security Council and how it uses Chapter VII and the Veto system in a way that runs counter to the principles of equality and justice, and emphasized the importance of obliging the coalition to change its habit of showing no respect for international humanitarian law and international law, end its aggression and blockade imposed on Yemen, apologize to the Yemeni people and recognize their revolution, and provide compensation due to the damage that has been caused by its aggression ongoing for seven years.

Mr. Esmail Al-Mutawakel concluded his speech with expressing appreciation for all those who participated in and contributed to the issuance of this study that plays an important role in exposing and shedding light on the violations of the Security Council.

During the ceremony, a video was shown to the participants, highlighting the content of the study and its main titles, which included the introduction and methodology of the report and a table showing the number of casualties during Security Council meetings. In addition, the study included an introduction to the powers and functions of the Security Council and was divided into four chapters followed by recommendations.

Aimed at drawing attention to the importance of the study and its legal content that can pave the way for pressing the Security Council and the UN to stop the aggression, Yemen Center for Human Rights held a discussion in two sessions on the subject of the study with the participation of law professions and senior officials.

The second session enjoyed the participation of Dr. Abdulrahman Murghim, Head of the Legal Department of the President’s Office; Mr. Nasr Al-Din Amer, Chairman of the Board of Directors of the Yemeni News Agency Saba; Mr. Ammar Al-Adra’i, Executive Director of the Oil Company; Mr. Tallat Al Sharjabi, Spokesperson for the Supreme Council for the Administration & Coordination of Humanitarian Assistance; and Mr. Muhammed Al-Abid, a political activist and media professional.

The discussion concluded that international silence over the crimes of the aggression against Yemen is beyond imagination and has crossed all lines. The participants confirmed that the Security Council is unwilling to perform its intended functions and has become an accomplice in all violations of human rights in Yemen.

The participants in the discussion sessions praised the study and pointed out that it can be used as an important source and reference to know the Security Council’s violations of international law seen in its resolutions on Yemen. The participants also called for conducting more studies aimed at documenting and monitoring crimes by the aggression and the violations of international instruments and laws seen in those resolutions adopted by the international community on Yemen.

Before concluding the ceremony, the journalists had the opportunity to present questions, which were met with answers from Dr. Abdulrahman Murghim, Mr. Tallat Al Sharjabi, and Head of Yemen Center Mr. Esmail Al-Mutawakel, who appointed out that this ceremony is the first ceremony and will be followed by tens of ceremonies in Yemen and abroad with the aim of delivering Yemen’s voice and putting an end to the aggression and blockade. At the end of the ceremony, Mr. Abdul Qadir Al-Wadayi and Mr. Muhammed Abdulrahman delivered the statement of the launch ceremony, which contained a number of recommendations including the call for the UN Secretary-General and the General Assembly to consider the Security Council’s violations against Yemen, refer them, along with the aggression, to the International Court of Justice and International Criminal Court, and adopt a resolution calling for putting an end to the aggression and lifting the blockade.

The recommendations also emphasized the importance of forming an independent international commission as soon as possible to investigate all the crimes of the coalition countries against civilians and children in Yemen and oblige the coalition countries of aggression to redress the damage and rebuild the country, and called for establishing a national commission of inquiry tasked with investigating allegations of violations of human rights and international humanitarian law.

The recommendations also stressed the important role of local and international civil society organizations in monitoring and documenting crimes that violate human rights in Yemen, in pressuring the UN and the Security Council to stop the war against Yemen, and in joining forces to bring legal cases against the aggression and the Security Council and demand holding those involved in the aggression against Yemen accountable. 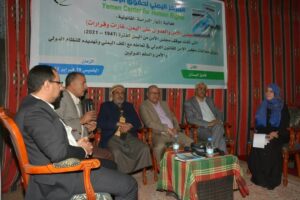 Condemnation Statement on the Crimes Committed by the Coalition of Aggression